It is important to remember that there is no distinct boundary between these communities. Each prairie type has scores of species (there are over 1000 in the tallgrass prairie alone) and species mixes vary greatly across the landscape, depending upon topography, moisture, soil type, fire frequency, grazing pressures and competition. On a bigger scale, there are gradual changes in grassland structure (species mix and plant size/density/vigor) as you move from region to region.

To the casual observer, all prairie types may look the same, but each is characterized by a distinct community of dominant plant species. Once you are able to recognize these different plant species, you will be able to identify a grassland type as easily as you can name different makes of cars.

The tallgrass prairie region in Manitoba extends from the US border, north through the Red River Valley, east to the Portage la Prairie area and into the Interlake.

The rich diversity and high production could only occur on premium soils, which unfortunately made this area prime for agricultural conversion. Less than a fraction of one percent remains in Manitoba. Relatively large tallgrass prairie remnants remain in the south Interlake and in the Rural Municipality of Stuartburn, but only scattered remnants occur elsewhere in Manitoba.

Manitoba’s mixed-grass prairie generally contains a mix of the shorter grass species that prefer the more arid conditions further west in the Canadian Prairies and the tallgrass prairie species found further east. These prairie grassland communities occur on well-drained, usually sandy or gravelly soils. They typically consist of a few dominant grasses and a variety of other grasses, sedges and wildflowers, but the species composition will vary with the conditions.

In the far southwest corner of the province, large grassland areas with only a few trees can be found, but moving north or east, this habitat grades into aspen parkland. Aspen parkland habitat is a landscape of grasslands intermingled with aspen woodlands.

Relatively large mixed-grass prairie remnants persist near St. Lazare, south and west of Melita, near Oak Lake and near Aweme.

Sandhill prairies can be found on the deposits of sand that were worked by wind into dune systems. Most of the sand has been stabilized by mixed-grass prairie type species but areas of open sand do occur.

The unique soil type, topography and dynamic nature of sanddune habitats has lead to the development of a resilient and ever-changing vegetation community that is host to a high level of biodiversity. A number of species in Manitoba occur in sandhill areas and no where else, including many of our species at risk such as Western spiderwort, Hairy prairie clover and Prairie skink.

Large expanses of sandhill prairie persist in the Spruce Woods Provincial Park/Canadian Forces Base Shilo area, in the Lauder Sandhills, and in several other sandhill landscapes scattered across southwestern and south-central Manitoba. 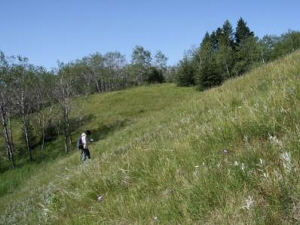 In Manitoba, Fescue prairie occurs as the grassland component of aspen parkland in the northwest region of the Prairies Ecozone of Manitoba. The extent of this habitat is not well understood. Fescue prairie is one of the rarest grassland types in Manitoba. Remnant pockets are found in the western uplands of Mantiba (Riding Mountain, Duck Mountain, and the Porcupine Hills).

Healthy and diverse native prairie grasslands provide many benifits to:

Activities that convert native grassland areas undermine the value of prairie for biodiversity and for the economy.The economy can flourish without destroying more native prairie.

Prairie in Manitoba has been lost to cultivation, improper grazing management, aspen and shrub encroachment and alien invasive species, among other factors. Much of what remains are in a fragmented or degraded state. Sadly, the amount of prairie grasslands continues to decline and we should be concerned about future risks.

The plough has long been the prairie grassland’s greatest enemy as most of the prairie has been lost this way. No one argues that cultivated crops are an essential component of our economu but in some areas, marginal lands continue to be cultivated when alternative uses such as managed grazing could provide a more sustainable income to landowners.

Once a site is cultivated, it is unlikely that it will ever return to its original native state. Cultivated lands will no longer support many of the species that rely on native grasslands.

Improper grazing is considered to be the greatest threat to much of the remaining prairie in Manitoba. Many producers manage for livestock numbers instead of the carrying capacity of the habitat. Grazing intensity that is too high can lead to higher soil runoff and erosion, poorer soil conditions, lower forage yields, lower species diversity, and an increase in undesirable and invasive species.

Many years of overgrazing, including grazing too early or too late, can be very detrimental to native prairie. On the other side, lack of grazing, especially in combination with fire supression, can lead to excessive litter build up which also decreases diversity and creates conditions favourable for shrub and tree growth.

Invasive alien plant species are species that have been introduced, unintentionally or deliberately, from a foreign ecosystem and have the ability to spread quickly. They displace native species, reduce wildlife habitat and impact grazing values.

Leafy spurge is of primary concern, especially in Manitoba’s southern prairie regions. This one species has taken over large areas in a short time and has resulted in a loss of revenue to producers.

Most perennial non-native invasive species are difficult to control and in most cases, unlikely to be eradicated. Other species of concern include smooth brome, Kentucky bluegrass, red top, Canada thistle, nodding thistle and sow thistle. The best defence against alien species invasion is a healthy ecosystem, where the species can better compete with these aggressive intruders.

Since much of Manitoba’s prairie grasslands occur within aspen parkland habitat, trembling aspen woodland is prevalent in many areas. Lack of fires and intensive grazing created the conditions that allow trembling aspen and other shrubs to move into areas that would naturally be dominated by grassland species. Because it spreads by sending new shoots (suckering), aspen is notoriously difficult to control. It reduces the size and health of prairie habitats and can eliminate entire grassland areas. Other shrubs that can become a problem in native grassland are western snowberry and wolfwillow.

With climate change occuring, and perhaps accelerating, all ecosystems will change, including Manitoba’s prairie grasslands. Given all the pressure and modification humans have subjected these ecosystems to, can they properly adapt?

How will Manitoba’s prairie grasslands fare within our ever-changing economy? Advances in technology and incentives from government for irrigation and drainage may promote even more conversion of prairie acres. As well, if there is an increase in intensive livestock operations, sites for disposing of the wastes produced by these facilities may become in higher demand, and studies show that fertilizing native praire, naturally or otherwise, will result in a shift in species composition.

What does the future hold?

Some of the text for the prairie grassland descriptions was provided by Parks Canada.